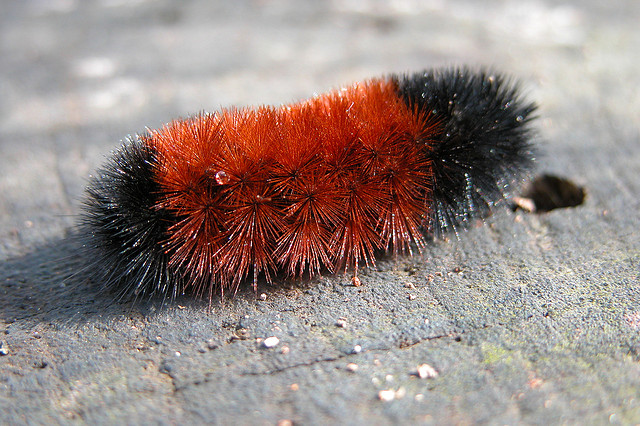 Neither one, of course! You are an insect hunter. We know moths and butterflies are categorized as insects because they have three main body regions, (head, thorax, and abdomen), three pairs of jointed legs, and one pair of antennae. Most insects also have two pairs of wings, while a few are wingless.

Wouldn’t it be fun to catch a Woolly Bear caterpillar and keep it alive in a jar, feed it everyday as it fattens and watch it?

The caterpillar will hibernate through the cold part of winter. In the spring you can feed it again, watch it spin a cocoon of silk and hair. One week later it will “hatch” and the moth will emerge. Then you can set your Tiger moth free outside.

The Woolly Bear is black and red. The head end and the back end are black and the center section is like a red belt.

The Woolly Bear is thirteen segments long. Usually, the stubby “fur” covered caterpillars are black for the first four or five segments, red for four to six of the middle segments and the last two or three are black. They vary.

The bear may appear to have only twelve segments (besides the head), but if you look carefully, you’ll notice that the last two are so closely joined they might be counted as one.

The Woolly Bear’s hair sticks out like hairbrush bristles. Each tubercule holds a tiny bouquet called a rosette of hairs. These appear to be even lengths, but often there are a few longer hairs on the rear segment. These bristles protect the caterpillar from becoming dinner for a hungry bird.

Birds don’t like bristles and when the bear is frightened or asleep it curls up into a little ball and is hard to pick up. Those bristles are like elastic and no easy for a beak to grasp.

Wooley Bears have true legs, prolegs and proplegs. What is that? True legs are in three pairs on the three front segments. They have little shiny claws that help it grip leaf surfaces. The prolegs are on four of the abdominal segments and help the caterpillar move along.

The prop-leg is on the rear segment and helps the caterpillar hold unto the leaves. These prolegs and prop-legs are not really legs, but elongations of the body.

Woolly Bear’s heads are shiny black. They look like they have been polished with shoe polish. They have yellow antennae and yellow spots on either side of the first segments and the sides of eight of the abdominal segments. These are called spiracles and they are openings to air tubes which run through the caterpillar.

Their eyes are so small that the caterpillar cannot see much. He feels his way around by lifting the front section and moving it out and back and forth searching for something to climb on.

Food for a Bear

The Woolly Bear likes many different plants most especially grass, dandelion, and clover. He eats his way toward winter and then rolls up in a ball on the ground—not eating anymore until spring. He eats the fresh spring grass and then proceeds to make a cocoon in April or as late as May. He spins the coon around himself and becomes a smooth little pupa inside a small felt like cocoon.

If you find a caterpillar put it in a box or breeding jar with plants and keep it outside where it will stay cold. Heat will likely kill it. A garage, playhouse, or in an unheated shed will protect it from big storms, but keep it cold.

In the spring, give it some fresh grass every day and a stick or two and watch it make a cocoon and then watch as the Isabella Tiger Moth hatches out at the end of May.

The moth is a dull grayish tawny yellow color. Look for black dots on the wings, dull orange-red tint on the hind wings plus a row of six black dots down the center of the body and on each side of the body is another row.

These moths are night fliers and they fly off to a suitable food plant and lay eggs.

Keeping a record of your bears, when and where you found them, what they ate, when they wove cocoons, and when the moths hatched and were released, helps you learn about this caterpillar and can be turned into a great school science project. Share your knowledge about Woolly Bears with others, so they can enjoy this super-cool insect too.