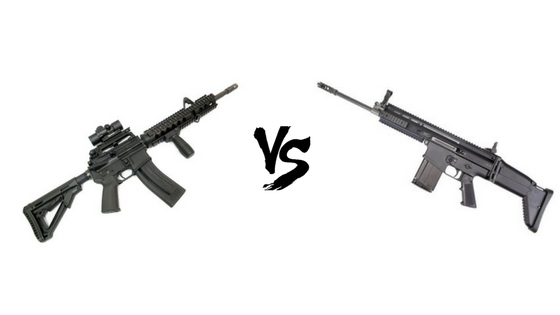 AR15 vs AR10: Comparison For Choosing The Perfect One

The AR rifles were designed for specific purposes and are incredibly popular among law enforcement and civilians alike.

They are very reliable, accurate, lightweight and compact. In addition, there are plenty of ways to custom AR rifles to make them a one of a kind gun.

This explains why we have an obligation to distinguish the most popular AR rifles on the market i.e. AR15 and AR10.

The debate between the AR10 and AR15 has sparked a lot of tension in the firearms community, with every advocate proclaiming the benefits of their preferred platform.

However, there is no right answer.

Both rifles have their pros and cons, which one needs to examine when making a choice between the two.

This post explains the differences between the AR10 and AR15 to help you the right choice for yourself...

The .308 caliber is more powerful compared to the 7.62 x 51 mm NATO cartridge. This is because the .308 uses a thicker brass casing and generates up to 62000 PSI of chamber pressure.

The AR15 is usually chambered in a 5.65 x 45 mm or .223, which have exact opposite requirements. The former is designed to be significantly hotter than the .223 and accepts the .223 Remington round.

It is important to note that loading the 5.65 x 45 mm into your AR15 is not recommended since it can cause damage to you or your firearm.

Ultimately, it is best for one to purchase ammunition that the firearm is specially designed to accept. The imprint on the receiver will let you know which caliber to buy.

The AR10 has greater felt recoil compared to the AR15 due to the fact that it is designed to fire a more powerful round.

It is important to note that the AR10 and AR15 offer excellent recoil absorption. As such, you will find the recoil manageable regardless of which of two firearms you choose.

The two major types of AR10 platforms include the modern DPMS adaptation and the classic Armalite design. The latter accepts an AR10 proprietary magazine. On the other hand, the DPMS accepts DPMS, SR-25 and other after-market magazines for the .308/7.62 calibers.

AR15 magazines are nearly 100% interchangeable because the firearm was designed for military use. Most of the components of the AR15 had to be designed to specifications that ensured interchangeability.

With the AR10 being able to fire more powerful rounds, it is understand why it is heavier than the AR15.

Most AR10 rifles weigh 9-10 pounds while the average AR10 weighs 6 pounds. While the weight difference seems inconsequential, it is important to note that any accessories you add to the rifle increase the weight of your firearm significantly.

Both the AR10 and AR15 are pretty lightweight when compared to other contemporary firearms. The inherent lightness allows you to carry more ammunition. However, you can carry more of the lighter rounds if you use the 5.56mm AR15 and 7.62 mm AR10 cartridges.

Despite outranging the 5.56 round, the 7.62mm round is much slower than its smaller counterpart.

The higher mass of the AR10 larger bullet makes it possible for the projectile to store more kinetic energy, which translates to knocking or stopping power.

So which one is better?

It is difficult to declare a winner because the AR10 and AR15 are incredibly popular and well made. Tactical accessories like enhanced grips, folding sticks, scopes and reflex sights make both of these firearms a one of kind of piece for anyone.

There are obvious advantages to both AR rifles and the winner really depends on the owner. For instance, those who prefer shorter firearms with a higher rate of fire will find the AR10 a worthy investment. The AR15 will prove the right choice for big game hunters, snipers and anyone shooting through obstacles.

If you are always engaging in close quarters combat or a small game hunter, the AR15 will be a better choice.

You can now see my dilemma. The choice between an AR10 and AR15 really comes down to personal preference. The AR15 would be my preference if I had to choose between the two guns. It covers more uses and offers increased versatility compared to the AR10.