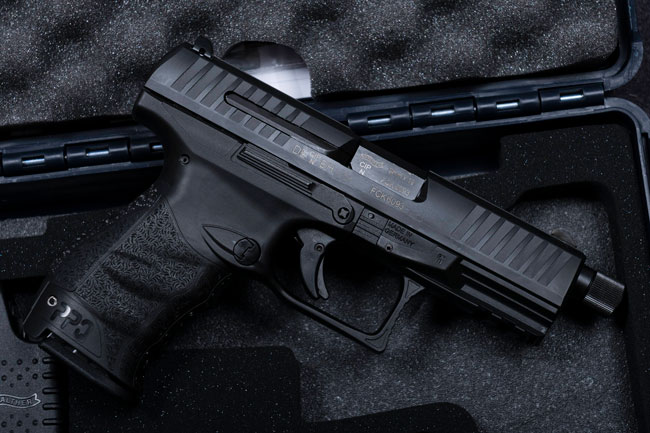 HK VP9 vs Walther PPQ: Side by Side Comparison For You

“Between the HK VP9 vs Walther PPQ, which one should I buy?”

We’ve come across this question on almost everywhere, including on forums, gun websites, etc. Even some of our readers here have reached to us for our opinion on which of the two handguns is ideal for concealed carry, home defense or hunting.

Honestly, this isn’t the type of question you can give a direct answer to because different folks have different needs.

In this post, we’ll do HK VP9 vs. Walther PPQ comparison to help you make a more informed decision. (FYI, we've another pieces on Glock 32 vs Glock 43 and Glock 25 vs 43 for concealed carry.)

Let’s start with a brief history of the two weapons…

Walther PPQ was introduced back in 2011, not really as a new gun, but as a re-imagine P99. The two modes even share the same types of magazines. The only difference between them is the trigger. While the P99 features a DA/SA system with decocker, the PPQ skipped all this mess and replaced it with the simplified GLOCK style system. HK VP9 was introduced a bit later, in 2014, and it was the first striker-fired pistol to ever come from HK since the discontinuation of the old P7 production.

Because this weapon is compatible with the older P30 and P2000 magazine compatible, upgrading it isn’t quite an issue for the users. A subcompact version of HK VP9 was even announced sometimes last year.

One thing we noticed was that the two guns have almost the same amount of weight and size. We’d say that PPQ is the lightest at around 24.5 ounces, while the VP9 weighs slightly higher at 25 ounces.

Regarding the size (length, width, and height), the two guns are also equally close, with extremely small differences existing between the individual dimensions.

While still on it, we also factored in the length of the barrel. We noted that HK’s barrel measures 4.1 inches while the PPQ barrel measures 4 inches. As you already know, a longer barrel is always better.

For both guns, they come with two top-quality, 15 round magazines right from the factory. But that’s not all…while Walther offers you 17 round factory magazines, HK bids you nothing, so you’ll have to go aftermarket for more rounds.

However, you need to understand that all paddle releases aren’t equally created, so you need to pay attention when choosing between Walther and HK. A close check at Walther’s release revealed to us that it has a generous 1-inch tab, which makes it extremely easy to activate. As for the HK release, it’s a lousy little ½-inch nub that peeks out from around the trigger guard base. Needless to mention, the release is a pain to operate.

The two guns are also designed to use the slide lock lever for easy slide release whenever you slot a fresh mag.

The PPQ features a pair of fat rails down the frame length.

For the VP9, things are a bit different. You’ll find a large tab sitting in the frame in recessed cut on the left section of the gun. And on the right part, you’ll find a long rail. While this combination is unusual, it’ll get the job done. In fact, it’ll give you a better feel and function compared to the PPQ.

The two guns come with the traditional three-dot sights. The dots on PPQ are, however, a bit smaller — though they’re all clear and visible.

The VP9 features sights that are dovetailed and drift adjustable. To be more precise, it features multiple front sights with varying sizes in addition to a rear click adjustable sight. Clearly, this is such a great upgrade, which definitely gives VP9 an edge over the PPQ. We also noted that the luminescence nature of the stock VP9 sights, where you can shine the light on them to make them glow in the dark for some period.

Unfortunately, most people seem to have issues with the VP9 sights due to their snag free design. This is to say that it’s impossible for you to catch the rear sight on something and then rack the slide using one hand. We believe this will be an issue for few people; many will not even care about it.

How could we not talk about Accuracy, the most crucial aspect of any handgun?

To establish the accuracy of the two handguns, we actually carried out a shooting test at 30 feet. We used our favorite, old Winchester white box ammo. We carried a series of 5-shot groups with VP9 and PPQ.

And this is what we got:

Starting with PPQ, we easily got the bull’s eye. Overall, the 5-shot groups was more spread out. It’s also worth noting that PPQ produced the harshest felt recoil as well as muzzle rise compared to VP9. We felt the trigger was too light.

In the case of VP9, we experienced almost the same felt recoil as the PPQ…but it had less muzzle rise. We attributed this to the gun’s low GLOCK-like bore axis, unlike the tall PPQ. The trigger of this gun also seems to have added to the overall shooting accuracy.

Overall, both guns are great and will deliver an excellent job in the hands of an experienced shooter. As for this test, we label VP9 the winner due to its reduced muzzle rise and recoil.

Don’t let anyone mislead you. Both VP9 and PPQ come with excellent triggers. They’re just way above most of the striker fired pistols you’ll get on the market today. And they’re as good as the aftermarket M&P or GLOCK triggers.

With that said, let’s look at the battle between the two specific triggers.

Let start with the PPQ. If you’ve ever used any Walther gun before, you know they’ve got a tendency of adding some something special to their guns, and this PPQ isn’t an exception. It features the traditional GLOCK style with wide curved face plus safety blade situated in the middle. The trigger also shows considerable amount of take up which is just touch rough and extremely light. There’s zero noticeable over travel. The reset is crisp, short, and tactile. Though the listed trigger weight is 5.6 pounds, you’ll feel it way lighter (say 5 pounds).

The VP9 also has the same GLOCK style trigger as the Walther PPQ. It delivers a much shorter and lighter feel. However, the break will seem heavier, and you’ll experience the noticeable quantity of creep on break. It has negligible over travel, and short, pronounced reset. Above all, it has a listed weight of 5.5 pounds which is doubtlessly heavier than the Walther.

Do we need to say that PPQ takes the crown in this particular category?

While the two guns let you easily customize the grip according to your preferences, they go about it in different methods as explained below…

The PPQ has the ubiquitous replaceable back strap. So, you simply drift the rear pin out, pull off the back strap, and then replace it with the one you prefer. Keep in mind that the gun comes with up to 3 sizes

As for the VP9, it takes its concept a bit higher - to 11- with replaceable back straps plus side panels. This will leave you with more and more configurations to pick from. Note that the gun presents you with up to 3 sets of panels and back straps.

Finally, we look at how the price of the two guns compare.

While the two weapons share almost the same features, performance, etc., the price might be the key determining factor in your purchasing process.

The HK lists its MSRP at around 720$, making it the most expensive model of the two. PPQ comes roughly at USD 650.

If you do your research well, you can get a VP9 going for USD 490 and a PPQ going for USD 480. As you can see, these prices are quite close, and we safely consider them equal.

Because we might get a winner in the price category, and we’d go with the PPQ!

Having discussed how the two guns HK VP9 and Walther PPQ compared across various aspects, we’re confident that you can now make a more informed decision on which model will match your specific needs.

In our own opinion, both weapons are great performers. They’ve almost the same level of accuracy. They share a wide range of features. Know what? There’s slightly less difference between them, and there’s actually no winner in the HK VP9 vs Walther PPQ. And the best model for you will simply be based on what specific needs, interests or expectations you have.