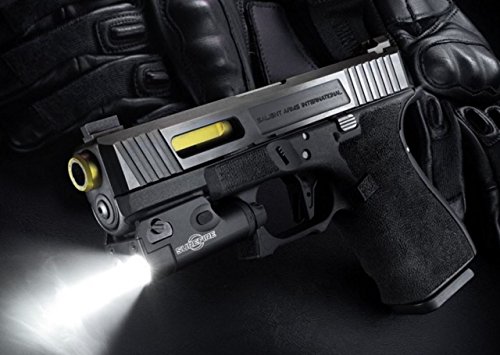 SureFire XC1 Compact Pistol Light Review: Is It Worth It?

Tired of using your weapon light which does not offer you much help when carrying out a tactical mission at night or in poorly lit areas?

This is a clear pointer that he light was not meant for this job. And we’ve come up with this post to enlighten you on SureFire XC1 Ultra Compact LED Weapon Light, the gold state weapon light that has been designed to meet all your tactical operation illumination needs.

It is specifically architectured to perfectly and quickly fit your rail handgun and provide it with the critical white light it needs.

This weapon light from SureFire, the worldwide lighting experts, has an impressive light output of 200 lumens. This is more that what your pistol needs to diligently execute the assigned duties.

Here are the Special Features and Benefits of the SureFire XC1 Weapon Light:

The performance of SureFire XC1 goes in line with your illumination needs for both long distance and close target easy identification.

It features a high-power LED circuit system that vomits a cool 200 lumens of tactical-level, ultra bright, well-balanced beam that runs for 1.5hours tactical time. The output light is not instantly directed out of the torch. Instead, it undergoes some treatment under the light’s multifaceted reflector.

The final result of this treatment is a MaxiVision Beam. This is a unique, evenly distributed beam that does not have a very bright center and weaker side illuminations.

It is fully optimized for human vision. It enables you to maintain situational awareness as well as easily identify close range threats.

This is probably one of the most noticeable things about SureFire XC1. For once, SureFire has come up with the smallest and the lightest weapon light. If you own the SureFire X300 or X300 Ultra, you’ll find that the size of this light is 2 times smaller and lighter than the two.

Can you imagine how small that is?

The fact that the light is extremely light means that it will not weigh down your weapon when you fix it. Its total weight, including the batteries, is 1.6ounces only.

Its compactness is seen with its super short length of 2.375 inches. The overall design is the slimmest in all SureFire flashlights. Given that it runs on a single AAA battery, its battery compartment is also very small, adding to its compactness.

Extremely portable is the word for this wonderful weapon light.

There is no easier task than that of operating these switches.

If you want to activate the momentary-ON option, you place your support hand thumb on the top of either the 2 rear (downward activated) switches and then push down.

Alternatively, you can achieve this by positioning your support hand thumb against the switch and pushing forward until the switch toggles down. To deactivate the momentary-ON option, remove the pressure you’re applying to the switch.

For constant-ON activation, you need to use your support hand to push the center crossbar switch from the left to the right. Switching OFF is doing the vice versa: pressing the switch right to left.

The compact body of SureFire XC1 is designed using the lightweight, rigid aerospace aluminum metal alloy. This automatically qualifies the light for the top position when its durability is compared to that of other weapon lights.

The hard metal gives the light the required ruggedness for an everyday carry light. It also makes it offer greater impact resistance on hitting rock-hard surfaces.

On top of the rugged metal, the light is surrounded by a black, mil-spec hard anodizing that doubles its durability. It does this by shielding the high strength aluminum metal from the effects of rusting, keeping off dust and scratches that might arise when you’re fixing the light on your weapon.

Easy to Mount to Your Weapon

This light is specially designed for mounting to your compact railed handgun. The manufacturer has fully customized it so that you won’t encounter any difficulties when fixing it to your weapon.

One of the best mounting capabilities you’ll love this light is its ability to fit on almost all the weapons, as long as they’re equipped with the universal rail systems.

SureFire XC1 is gasket sealed. This is enough evidence that it works well under all weather conditions. Whether you’re carrying out tactical activities that involve wet environments, the light will remain active all through.

This is a golden opportunity presented to you by SureFire, given that most weapon lights in the market find it hard to operate in severe weather conditions.

The 200 lumens power output by this weapon light is made possible by a single Lithium AAA battery. The output light is sufficient for tactical use and more so for your pistol platform.

This is an amazing job you probably couldn’t expect a single AAA battery to handle. These kinds of batteries are readily available, so you won’t get headaches replacing them.

Another awesome fact about these batteries is that they’re very cheap compared to the CR123 used in other flashlights.

This cuts the maintenance cost of the light by half.

Surefire Xc1: Should I Buy With Red Laser Or No Laser?

Like other firearms, buying a Surefire Xc1 with a laser sighting or none is another subject that has generated a lot of interest recently. While some strongly hold the opinion that the red laser is an essential accessory, others entirely dismiss its relevance with strong points such as the ones mentioned below:

As reasonable as these points may sound, they are mere “myths” do not carry any weight when it is investigated.

Funny enough, these seemingly strong arguments are often advocated by those who have never used a laser with live fire before, especially in the dark. That’s the more reason you should have your own epiphany!

To Correct the First Impression

In the face of an invasion, it doesn’t really matter whether the supposed-to-be-attacker sees your laser or not. Because it is expected that you will immediately release a speeding bullet in the same direction of the laser.

So except you are planning to shot, your laser shouldn’t be on, especially when you’re in front of an enemy.

To Correct the Second Impression

Again this is just as ridiculous as it sounds. Why would anyone want to carry a laser around that is not even fully powered?

The same way you won’t risk driving around with a bad car battery, why would you want to risk it with your laser?

So just like with every vital technology, don’t give your laser the chance to disappoint you. Change the batteries before they run out. You can also carry night sights around so that you don’t regret anything.

To Correct the Third Impression

To say a laser is a crutch for poor shooters is just the same as saying it will make you not to shot correctly. So instead of serving as a useful accessory, a laser will be irrelevant and degrading. Isn’t it ridiculous?

Again the problem is that most of the people who think this way have not learned the basics yet. If they do, they will know that using lasers will consolidate their shooting capability instead of taking it away.

Any experienced shooter will agree that a laser can help with sight alignment and trigger control.

Now that we’ve cleared up the myths, let’s see why you should buy a Surefire Xc1 with a red laser:

If you’ve never used a laser before, one of the first thing you will notice when you eventually start using one is that your aiming ability will be greatly improved.

You will be capable of shooting more accurately in various lighting condition.

Aligning iron sights will become easier, which is a huge advantage in low light situations.

Ability to Shoot from Various Positions

Most defensive firearm arm practice only prepares shooters to shoot from a standard position; usually standing with both arms on the gun. This might not be helpful in a real-life shooting situation.

In a gunfight, it is possible to get injured, or you may have to shoot from lying on your side, on your back, or from behind cover, in which case you may not be capable of shooting with both hands.

Having a laser in such a situation can be really helpful as it allows you to aim and shoot accurately from different positions without even aligning your sights.

Helps You to Establish Focus on Your Target

As we mentioned earlier, you don’t need to align your sights while using a Surefire that has a laser. This is mostly helpful during violent confrontations as the laser helps you to remain completely focused on your target.

The only work you need to do is to align the laser dot on the threat and you are too good to fire as the occasion demands.

Well, that is all for today. Hopefully, this somehow serves your query. If not, let us know in the comments section below.

1. Which rail systems does this light work with?

The number of rail equipped handguns the light can fit on is indefinite. It securely fits on almost all the rail systems.

The light is 100% waterproof. It is gasket sealed to prevent possible penetration of water into the system which might affect its functioning.

3. What kind of batteries does this light work with?

SureFire XC1 is a game changer pistol light. It significantly improves the way you use your weapon when surrounded by darkness. It outputs MaxiVision beam that runs for 1.5hrs tactical period, helping you identify your targets easily.

It is gasket sealed to operate in all weather conditions. And the best part- it’s easy to operate and maintain.

Honestly speaking, SureFire XC1 is a super cool deal for those looking for a durable weapon light that has all the essential features. Don’t forget that it’s baked by SureFire’s NO Hassle Guarantee.

I have a surefire xc1 and it has an issue! I love the light but when I switch it to constant mode it runs for about 10 seconds and shuts off. I’ve tried a couple batteries and that’s not the problem! Any suggestions? Thanks

Haven’t heard of such issues on the Surefire XC! model, you can contact the manufacturer and get the right suggestions for you.