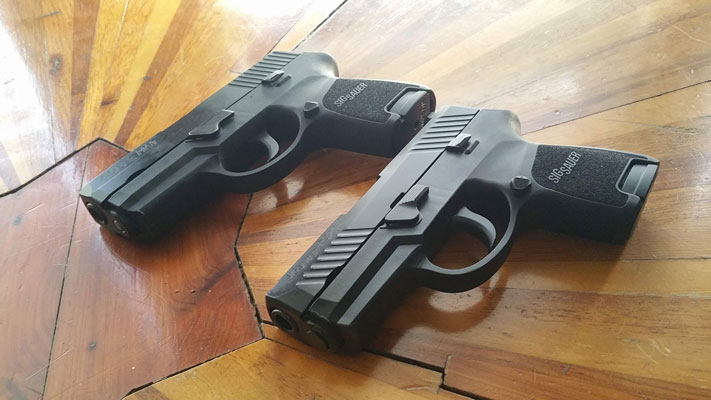 Sig Sauer P226 and P320 are the two top options for anyone looking for a 9mm pistol. Both come with good looks, durable construction, and have won a spot on the list of the most robust service pistols.

They even enjoy extensive usage in the US military as well as in many police departments across the globe.

Now, if you’re wondering which of the two guns you should go with, this guide is for you.

Below, we’ll focus on the key similarities and differences between the two weapons. By the time you’re done reading this article, you’ll know which model matches your specific needs and expectations.

Now, let’s get into more details…

Now let’s discuss each of these guns separately… We start with the Sig P226. Back in the 1980s, the US military was looking for a better alternative to the M1911A1 handgun which has been used in the First World War. Though the handgun was still effective and deadly, NATO was standardizing on the 9mm cartridge. And this led to a conclusion by the US soldiers that the 8 rounds weren’t equal to the task for them.

Sig Sauer grabbed the opportunity to produce a new handgun. They redesigned and modified their already existing service gun - the P220 - which they have previously made for the German military. The newer version was a double stacked 9mm — and that’s the P226 you and I know today.

The first thing that makes the P226 a great gun is the fact that it has no safety. On this gun, you’ll only find three controls, namely the decocker, magazine release, and slide stop. It is meant for carrying with a round in the chamber and with the hammer decocked. This results in a heavier double action that is less prone to accidents when accidentally pulled (unlike the light single action trigger).

Because there’s no safety, you can quickly draw and employ this gun whenever you need some deadly force! You don’t have to flip the mechanical safety on or off; the moment you remove it from the holster, it’s good to go.

Another nice aspect of this gun is that when the hammer gets decocked, it doesn’t get anywhere near the firing pin. This gap, together with the block safety of the firing not only makes the gun drop safe from a reasonable distance but also requires you to use sufficient force (the force that you might apply to bend some serious metal) to make them go off.

Something else that pits the safety of this gun a step higher is the hood situated at the back of the gun. This protects the firing pin from anything that comes in the sides.

Another area where this gun shines is how comfortable it feels in your hands when firing. It has excellent ergonomics that make it fit perfectly well in your hands so that handling won’t be an issue. However, we noted that people with smaller hand have had handling issues.

Just like any other handgun, this model has a few downsides that we’d want to bring to your attention to.

First, it’s the trigger. Most owners of P226 have complained that the trigger has an over travel and extremely long reset. This means that the handgun is slower to fire compared to the modern pistols out there. After doing our research, we noted that SIG has since fixed this issue. They’ve come up with the Short Reset Trigger (SRT), which seems to fix the trigger issues associated with their guns.

The second issue lies in the slide top. It’s positioned right under the right thumb. Though this design makes the process of releasing the slide easy, some shooters have complained about its ineffectiveness.

One of them said explained that “whenever I tap/rack my Sig P226, I find the magazine and chamber empty.”

The last downside we’ve noted users complaining about in this gun is its size. If you’re planning to use this gun for IWB or concealed carry, you might find it quite uncomfortable due to its big size

Our opinion: Apart from the few cons, the Sig P226 as a great, reliable gun that’s beautifully constructed. It’ll perform excellently well in a shooting competition. In fact, it’s one of the top-rated DA/SA handguns (with double stacked magazines) you can get on the market today!

We urge you to consider P226 as your ideal handgun, except when looking for CCW (concealed carry weapon). The Sig Sauer P320 is also a popular handgun from Sig. It is a polymer framed handgun that differs from the P226 in that it utilizes the striker-fired mechanism.

Even better, it’s a modular handgun!

This handgun was introduced into the market (in North America market, to be exact) on 15th January 2004. Not long ago, right? This is the reason it’s regarded as the 21st-century gun. Just like the P226, this gun is an improvement of a previous Sig model — the Sig P250. The MAIN difference between the two is that P320 uses striker fired mechanism while the P250 uses double action hammer system.

In case you’re wondering what this competition is all about, here’s an explanation:

Their quest to find that perfect handgun is known as MHS.

And the main reason behind the design of the Sig P320 was the MHS military competition.

This makes it easy for us to explain to you the first thing that puts this gun on the map:

While most firearms are labeled as modular, NOTHING has ever come close to the P320. This gun allows you to change nearly all its features. It disassembles in seconds, with the whole metal chassis sliding completely off the frame.

Finding a great modular handgun like P320 is really a massive deal that will save you a significant amount of cash in the end. A good example of how it can save you money is when you want to switch from 9mm to 45ACP gun. You won’t need to buy a new weapon; instead, you’ll just spend approx. $350 to get a conversion that helps you smoothly transit to your caliber of choice.

If you use this gun in a shooting competition, you’ll have the opportunity to buy a trigger group of your choice — one that you’ve tweaked and polished to suit your specific needs, and easily swap it between different guns.

The other less-known benefit of the easy disassembling process of the parts of this gun is that it makes the cleaning process easy and fast.

During firing, the gun will feel as hard as all the all-metal weapons designed by SIG. Though many polymer-designed firearms have a toy-like feel, this model has an entirely different taste. It has a less recoil force than with its rivals (the 9mm handguns). As for the sights, they’re similar to the ones you’ll find on the P226.

We also noted that SIG had chosen a steeper approach in designing the grip of this handgun, unlike in their traditional grip angle design. So, if you’ve been using a gun with the earlier design, you might take seconds to get acquainted with how the P320 points… but it’ll start feeling natural pretty quickly.

Other notable improvements in this gun include the full-length Picatinny rail, metallic magazine, night sights, and a conveniently designated magazine release button.

As with our previous gun, the P226, we noted a few cons we’d like to bring to your attention in this model below.

The first issue revolves around the trigger. It easily breaks due to the artificial increase in pull weight, which might not be a preference for most people. In other words, this trigger isn’t as clear and crisp as you’d prefer. Other than this, P320 has a good trigger that’s pretty solid and its way better than the S&W M&P and GLOCK triggers.

The second issue is about the gun height. When we say height, we mean that this gun has a higher bore axis. Needless to mention, this will lead to longer arm, and thus more felt recoil. (For the record, this recoil is less than you’ll feel with a P226).

Our Opinion: SIG 320 is a great modular handgun that will function incredibly well. We highly recommend it to anyone looking for a great striker fired handgun.

Now you know what the two B.I.G guns from SIG SAUER entail, and making a choice will be pretty easy for you.

As a quick recap, the Sig P226 is an old-school model (a classic). It’s actually a battle-tested and proven pistol that you can trust and rely on to save your life and that of your family when the need arises.

The P320 is a modern handgun, featuring all the latest innovations in the gun world today. Being a striker gun, it’s the ideal pick for those who require a shorter, easy pull. It has easy and ambidextrous controls. Plus, it’s modular in nature, which makes it both practical and tactical.

The choice is entirely yours! (For concealed carry weapons, you may consider reading the Glock 17 vs 19 vs 26 Comparison.)

Thanks for review and information. Very useful for me.