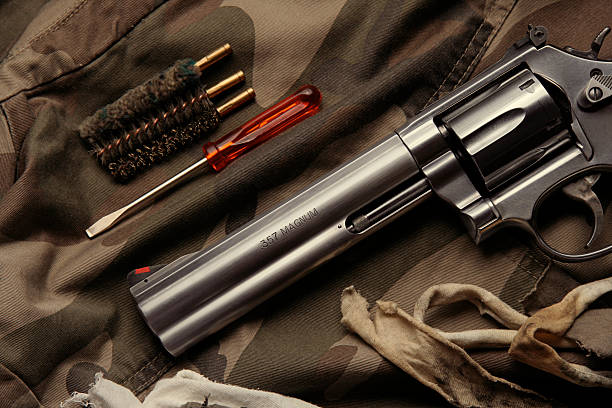 357 Magnum vs 44 Magnum: A Head To Head Comparison

.357 magnum and .44 magnum… these are top handgun/carbine type cartridges famed for their unrivaled velocity and hard-hitting capabilities.

Both trace their origin to the United States (though at slightly different times). And they find widespread use in shooting, hunting, and self-defense.

With that said, different people have aired their views and opinions on how the two cartridges compare to each other. While some of this info contains truth, we found most of it to be dishonest and misleading.

That’s why we set up A-Z guide below to walk you through a complete comparison that exposes you to the REAL differences and similarities between the two handgun cartridges.

First, we take a quick look at the specifications of the two cartridges…

The 357 Magnum (also known as .357 S&W Magnum) was developed around 1934 by Elmer Keith, Phil Sharpe, and the Smith & Wesson firearm manufacturers.

Around this period, the US police force was in desperately looking for a cartridge with better terminal ballistics in self-defense or shooting/hunting scenarios.

This made the above mentioned parties make modifications to the Smith & Wesson's .38 special cartridge, leading to the creation of .357 Magnum. Fast forward, the cartridge has become a favorite for all the handgun user varieties of this mag round has been produced to enable the shooters to get the perfect ammo for various applications.

The .44 Magnum (also .44 Mag. or 44 Remington Magnum) was first introduced in 1956 by Elmer Keith and the Smith & Wesson firearm manufacturers.

Keith made improvements on the .44 special with the aim of offering more energy and velocity to the bullets used. Later on, Remington and Smith & Wesson began commercial production of these custom rounds as well as firearms chambered to use the .44 mag cartridge.

Despite the introduction of many competitors, this cartridge is still a favorite for hunters and shooters alike. It still delivers incredibly high velocity and energy — resulting in hard-hitting, deep penetrating capabilities.

And now to our head to head comparison…

As you already know, ballistics performance refers to the science of how the bullets travel in the air (under the effect of gravity, atmospheric drag, and momentum) when fired from the gun.

To understand the ballistics of the two cartridges, we’ll discuss them along the following sub-topics…

Velocity teams up with bullet design and weight to determine the overall terminal performance of a round and its penetration and expansion capabilities.

That being said, the larger .44 Mag rounds record low velocities than .357 Mag rounds when shot at a distance of around 50 yards. This is quite understandable, given the fact that these are heavy rounds and sending them downrange will result in recoil that might be difficult for you to handle.

Needless to explain, you’d expect the smaller .44 Mag rounds to move at a faster speed than some of the .357 rounds…but you’ll still experience some heavy recoil.

Overall, if you’re ready to deal with high recoil, then you can go for a cartridge with higher velocity. The only downside of having too much velocity is over penetration. (However, this can only become a con when dealing with a bullet with unbelievably high-velocity levels and inability to fragment or expand).

NOTE: Though most folks don’t know this, your gun barrel length can affect the overall velocity of the bullets during firing.

Concerning the trajectory, there’s not much difference between the two handgun cartridges until they hit the 75 and 100 yard marks.

As you can easily guess, the heavier .44 rounds will show a more overall drop than the .357 Mag rounds.

Assuming that you’ll be using either of the cartridges for self-defense or hunting purposes, we trust that both of them will suit your needs as they show minimal trajectory loss up to the 50-yard mark.

Ballistics coefficient is a number obtained from several bullet dimension variables. And it helps you determine how well a bullet is streamlined.

The higher the number, the better bullet easily cuts through the wind with reduced atmospheric drag. In other words, it means that your bullet will be in a better situation to hold its velocity and it is easier to put on your target down range.

For handgun rounds, ballistic coefficient isn’t of much importance. But we figured out that the two rounds are also ideal for use with carbines — where you might need to take shots at a longer distance — so, we decided to discuss this factor as well.

When different rounds of both .44 Mag and .357 Mag are put on the comparison table and analyzed for the BC factor, you’ll note that they don’t show any significant difference.

Not only that but we also quickly note that they don’t have good BCs; this is possibly due to the general design of a handgun round.

It’d be a huge mistake not to compare the two handgun cartridges in terms of accuracy. This is because anyone using a handgun (especially for self-defense and hunting) would want to ensure maximum accuracy.

The best thing about the two cartridges is that they exhibit minimal bullet drop, even when shooting at distances up to 50 yards. For those who plan to make shots at a distances greater than 50 yards, however, you’d want to use the .357 Mag as they usually exhibit a slightly (a few inches) less bullet drop compared to the .44 Mag. All the experienced shooters in the house will agree that the recoil factor also affects the accuracy of a shot. That said, .44 Mag shows more severe recoil than .357 Mag. If you’re not experienced in handling heavy recoil, the former can adversely affect your accuracy, especially in a self-defense situation.

The stopping power of any given cartridge is based on the energy that gets transferred from the bullet to your target as well as the bullet penetration.

Let’s see how the two cartridges compare when it comes to the energy transfer and penetration capabilities.

The more energy (kinetic energy) a bullet transfers to the target on hitting it, the more damage it does to the surrounding tissue, organs, and nerves. For hunting or home defense scenarios, you’d want something that delivers maximum energy transfer for the best results.

Most of the .44 Mag rounds have shown the ability to transfer an incredible amount of energy — up to 600 ft.lb at a distance of 100 yards. This is more than enough stopping power that will help you suit most of your applications.

The .357 Mag rounds carry less amount of energy compared to the .44 Mag rounds.

But don’t let that fool you into thinking that the .357 Mag rounds are any weak! Most of them will still be able to achieve an amount of energy as high as 500 ft.lb mark at the 50-yard bench. This is clearly more than enough power to penetrate and damage a target.

Note that the heavier .357 Mag rounds will perform like the .44 rounds, meaning that weight is the key determinant here.

How do you even measure the penetration power of a cartridge? Are you wondering this already?

Well, this is simple. You just need to look at the sectional density of bullets of the given cartridge. Bearing in mind that sectional density is derived from the weight and diameter of the bullet, it makes sense to say that the more force applied to a small area, the greater the penetration.

Don’t forget that bullet design has also been shown to affect the penetration. That is, rapid fragmentation and expansion tend to negate deep penetration.

Now, the .44 Mag rounds usually provide more penetrating power compared to the 357 Mag rounds. Again, this doesn’t make the .357 rounds any weak. Despite their smaller diameter, the heavy weight associated with the .44 Mag rounds lead to a boost in their sectional density.

Now that you plan to use either of these cartridges for situations that require the ultimate accuracy, you’d want to ask yourself if they’ll let you fire several rounds in quick succession without affecting your overall accuracy.

That’s what recoil is all about!

The .357 Mag rounds generally have less recoil energy than the .44 rounds. Most of the .44 Magnum rounds show almost double the amount of recoil as the .357. However, it’s possible to find some .357 rounds with virtually the same recoil as some of the .44 Mag rounds.

The increased recoil in .44 Mag rounds comes from the fact that they’re heavier and feature a larger diameter than the .357 Mag rounds. For this reason, you’ll need to put extra force when firing them, and in return, you’ll receive more recoil.

Now that you know the ballistics and the overall performance of the two handgun cartridges, which are the perfect situations to use them in?

For the most part, the ideal application of each cartridge will depend on the bullet.

You can expect the .44 Mag to offer you more security than the .357 Mag when used with a trail gun. As we stated earlier above, some .44 Mag rounds come with heavier bullet loads, which hugely increases their penetration power. This makes them ideal for keeping yourself safe from predators such as beers, when out there camping. While you can still find some .357 Mag rounds ideal for the same use, we insist that you go with the .44 Magnum rounds.

As for the home defense, you can go with any of these cartridges. Both will do a good job as they produce sufficient stopping power for the intruders. Both will also offer rapid expansion for larger wound formation.

For the less experienced users, however, you might want to avoid using .44 Mag for home defense because of its heavy recoil as it can mess with your accuracy.

The last thing we wanna discuss with you before we close this guide is the cost of these two cartridges.

If you plan to buy factory loads, then you must be ready to spend more bucks on the .44 Mag than the .375 Mag.

The same case applies for the brass if you wish to hand load your rounds.

Even though you can get rounds that hand on the cheaper and high-cost end for both .44 Mag and .375 Mag, the fact remains that the .44 Mag will always come at a higher price.

So, that’s everything you need to know about the two handgun cartridges, the .44 Mag, and .375 Mag.

From the lengthy discussion above, we can all agree that the two cartridges have their own set of strengths and weaknesses.

Regarding use, you can expect both cartridges to serve you well in shooting, hunting or self-defense situations. In other words, no cartridge’s more suited for use in the mentioned situations than the other.

In conclusion, the best cartridge for your handgun will boil down to your personal choice. Based on your unique needs and expectations, you’ll be able to make an informed decision on which one you’ll go with.