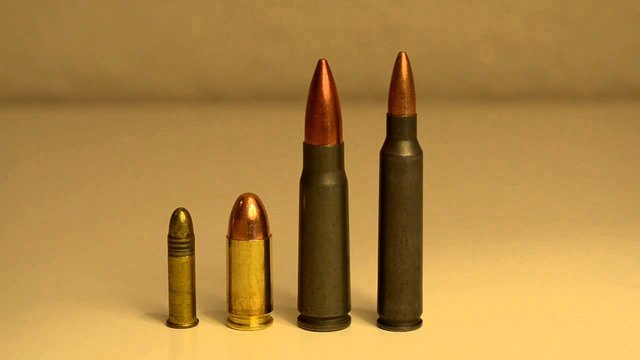 You are bound to come across the 5.56 vs. 7.62 arguments when you're looking to purchase a tactical rifle. Both of these cartridges have been used by the military and civilians for many years. They both have their loyal followings as well.

The comparison in this blog is not aimed at labeling one cartridge superior to the other one. Looking at different performance categories, each cartridge will do well in some and do poorly in others. We will look at ballistic performance, rounds for both cartridges and draw conclusions.

Back in the late seventies NATO countries decided that there was a need to replace the 7.62x51 mm round which was in use. The problem with the 7.62x51 mm round was that the rifle weight, ammo weight, length of the rifle, and recoil did not match the kind of combat that was happening in the world at that time.

After that decision was made, the 5.56x45 mm round, which was lighter, was created. It had a high-velocity and its trajectory was flatter than for the 7.62x51. The lighter recoil suited the automatic and semi-automatic shooting scenarios, and soldiers were able to carry the same ammunition load or more, at a lighter weight.

The 5.56x45 cartridge is not only popular in the military, but also in the civilian circles where the AR-15 is usually chambered for these cartridges. The ammunition is readily available and it has varying bullet weights and designs to suit the needs of the user. The weight of the bullet usually ranges from 50-75 grains. For reloading the bullets all by yourself, don't forget to check out the best reloading press reviews.

The 7.62x39 is a very popular cartridge across the world. Its original design was made in the forties in the Soviet Union to manufacture an all-purpose round that could suit different military settings. Over the years, the cartridge has undergone several transformations.

This round is often used in close quarters firing and in shooting competitions. It is also popular among hunters. The AK-47, a very popular rifle, is chambered for this round.

The 7.62x39 comes in a variety of designs. For example, there is a complete metal jacket and soft point bullets that are suitable for hunters. It is available in loads of different designs and jackets. The bullet weight usually ranges from 122 to 125 grains, with some varieties weighing 150 grains.

There are distinctive differences between the specifications of these cartridges. The bullet of the 7.62 is much wider than that of the 5.56. Though the difference is only about 1/10 of an inch, it is very large for bullet design and greatly affects the ballistic properties.

In general, the 5.56 is thinner and longer compared to the 7.76 in terms of the casing and overall length. Despite that, looking at the bullet lengths and how they stay in the casing, the total length between both rounds is roughly 6/100 of an inch. Though the 7.62 cartridge can hold more powder than the 5.56, it cannot sustain the same pressure quantities.

Here, we look at the 5.56x45 and 7.62x39 in terms of several ballistic groups. Ballistics alone may not tell us which round does better in particular hunting, tactical, or overall shooting scenarios, but it does play a huge part. We dig deeper into the velocity, ballistic coefficients and trajectory to draw some conclusions.

Velocity is a vital comparison category because it is linked to all ballistic and performance specifications of both cartridges. Faster cartridges hit the target quicker, and they're less prone to the surrounding factors that can distort the flight path and trajectory of a bullet. Velocity is also important in terminal ballistics, particularly for increasing the size and penetration power of the bullet.

From the above chart, it's clear that there's a district difference between the velocities of the two rounds. The 5.56x45 has lighter bullets and less powder loads, as a result, it leads to a faster bullet from the gun out to a distance of 500 yards.

The 7.62x39 cartridges have a much lower velocity in general. It should be noted however, that they tend to maintain their velocity better compared to the 5.56x45 rounds, where the velocity changes very quickly.

A figure that is derived from a number of factors related to bullet design is called the ballistic coefficient. This figure tells us of the streamlined nature of a bullet. The more streamlined a bullet is, the better it is able to resist air and wind forces.

A higher ballistic coefficient does make it easier for the bullet to have added precision at long distances, but it does not replace the skill of the shooter.

Here's a ballistic coefficient chart for the two rounds. The data is sourced from Huntspot where 10 rounds of 5.56x45 vs. 7.62x39 were compared.

When choosing cartridges, you need to study the trajectory. You will want to look for a flat trajectory, where the bullet moves a large distance without bleeding too much elevation. It is measured in bullet drops. The further a bullet drops, the adjustments needed to have an excellent shot will be larger, and it will be harder to be accurate.

The graph below sourced from Huntspot shows the flat trajectories of the two rounds. As the distance increases, the difference in bullet drop also goes up. By the 500 yards mark, the 7.62 cartridge has a bullet drop of almost 50 extra inches than the 5.56 round.

Both types of cartridges are readily available from a lot of retailers that sell ammunition. They can also be bought in bulk. There's a much greater selection for the 5.56 ammunition compared to the 7.62.

In the current market, the price is roughly the same for both cartridges. The 7.62 may be a bit more costly, but the difference isn't that large. Both of these cartridges have particular rounds that are cheap and others that are expensive.

Having compared the 5.56 and 7.62x39 rounds to some extent, I hope you now have a better idea regarding the most famous cartridges!

For the best bullet pullers in the market, click here and read!