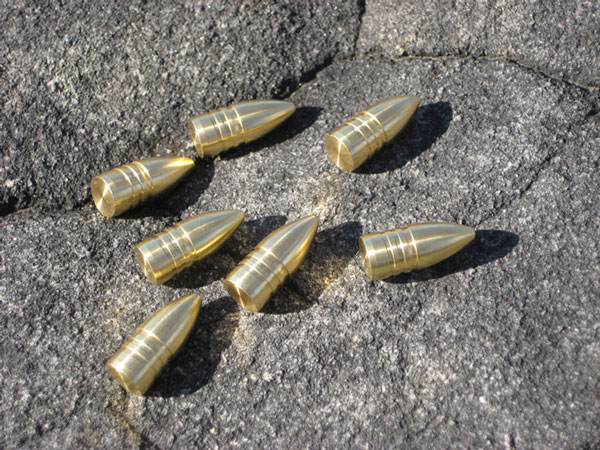 If you’re looking for the best big bore cartridge, then you can never go wrong with the.458 Socom and .50 Beowulf.

Featuring extremely large designs, these two cartridges are highly popular in the big game hunting circles and are ideal for many other tactical uses. They share a lot of similarities, which makes it almost impossible for hunters to determine which one to use and which one not to use.

In today’s post, we’ll take a closer look at the two bullets. We’ll take you through an exhaustive.458 Socom and .50 Beowulfcomparison that will point out the major differences and similarities, weaknesses and strengths between the two cartridges.

This information will help you decide which cartridge will meet your personal hunting requirements and specifications.

As usual, we first familiarize ourselves with the specifications of the two rounds.

The .458 Socom was designed for use by the US military after the Battle of Mogadishu. The military’s SOCOM (Special Operations Command) members were disappointed by the stopping power of the 5.56 NATO round, so they wanted a large bore round that could still work with the traditional M4 lower receiver.

Today, Tromix and a few other companies manufacture the rifles as well as the upper receiver. The gun has also received a huge following by the civilians, especially the AR enthusiasts. Many regard it as a great low velocity round for home defense and hunting use.

The .50 Beowulf was designed around the same period as the .458 Socom (in 2001). It was designed by Alexander Arms with the main purpose of producing a big bore cartridge for use with the AR15/M14 type style rifles, which were originally chambered for the 5.56x45 rounds.

This round was well received by the military as well as police force as it enabled them to deal with CQB situations more effectively.

In today’s world, the cartridge has become a popular choice for home defense and hunters.

The first thing we need to look into regarding the two rounds is their ballistics. This will help you get an idea what kind of performance you expect from them and their limitations too.

Generally, the two rounds have low velocity. Remember they’re intended for close encounter scenarios (below 400 or 500 yards), where a lot of expansion isn’t always necessary.

At first, the .50 Beowulf shows a slightest higher muzzle velocity but loses its edge much quickly. The difference between the two rounds recorded over 100, 200, and 300 yards, shows the .50 Beowulf round having a higher velocity.

But considering that this difference doesn’t go beyond 100 ft.lb,it’s doubtlessly insignificant.

Overall, you can expect the two rounds to fly at supersonic speeds from 0 to 200 yards.

Talking about the path followed by the two rounds when fired from your rifle, they follow similar trajectory from the muzzle up to around 150 yards.

Pat 300 yards, the two rounds have discouraging trajectory that would give even the most skilled marksman issues when shooting a target.

Neither of the two rounds wins in this category.

You already know that BC gives you a clue how streamlined your bullet is, with a higher bc indicating the bullet being more capable of resisting drag and drift, wind drag,  when flying toward your target.

What you can expect for the .458 Socom vs .50 Beowulfcomparison: both cartridges generally have low bc values. If we look further into rounds from each cartridge, we’ll find that the .458 Socom rounds display a slightly higher bc on average (though it’s still small).

The small bc value of the two cartridges can be attributed to the fact that both rounds are designed with the aim of delivering a huge amount of force to a target in close range battles. This way, the bullets that accompany them are usually rounded or come with flat nose that aren’t very resistant to drag.

The .458 Socom rounds show slightly lower recoil energy compared to the .50 Beowulf. Most rounds of the .450 Socom fall around28.89ft.lb while those of 50. Beowulf falls within39-32ft.lb range.

The increased recoil of the .50 Beowulf could be attributed to its higher muzzle velocity we saw earlier on.

The following chart indicates how the recoil force of rounds from each category (with the same powder charge) looks like:

As long as you intend to use these rounds for home defense or hunting purposes, stopping power is a crucial factor that should help you make a better decision.

In determining the stopping power of the two rounds, we look at the following key attributes: This refers to the kinetic energy that a bullet carries with it when it gets launched from the gun barrel. For hunting/self-defense, you’d want enough to neutralize your target and stop it right in its track.

When shot out of the muzzle the .50 Beowulf exhibits greater bullet energy than .458 Socom. When they reach the 200 and 300 yard marks, the difference starts getting smaller, with the .50 Beowulf maintaining the lead.

The penetration potential of a bullet is derived from its sectional density. Because the .458 Socom has a slightly smaller bullet diameter, you can expect their penetration power to be higher than that of .50 Beowulf due to larger weight acting on a smaller area.

The .50 Beowulf is designed to be most effective at stopping targets at short to medium range distances, making it the preferred round used at vehicle checkpoints by the military. This particularly makes sense since the round is heavy and its flight path is not affected by glass or standard vehicle body panels, meaning they don't deflect, but rather go straight through to the target. That being said, that stopping power at shorter distances makes this round a top choice for big game hunters, especially those who are hunting for bear or just want a greater ability to defend themselves against a potential bear attack while hunting other game.

When discussing accuracy of the two rounds, we need to bring into play their ballistics. We saw that both have similar ballistics, with only a few slight differences.

If you’re planning on taking shots within the 100 yard range, one of the two cartridges has an advantage over the other.

For shots beyond 100-yard mark, however, you should consider using.458 SOCOM rounds since they showed a flatter trajectory, higher velocities, and higher BCs than the .50 Beowulf rounds.

We should also consider recoil as one of the key determinants of the rounds accuracy. We saw that .50 Beowulf generates a higher recoil force than .458 Socom on average. However, both rounds produce enough recoil to make it difficult to accurately make shots in quick succession on your target.

Nevertheless, any experienced marksman or hunter can make the recoil of these two rounds more manageable to achieve accurate shots in quick succession. Like with any weapon, lots of practice is required to become an experienced marksman. Just have patience and you'll become as accurate using either of these rounds as you want to be.

The fact that the two rounds are relatively obscure affects their availability. They don’t have a large market compared to other tactical and hunting rounds.

For this reason, their availability is going to be limited if you’re shopping in retail store. And if you get them, you might get limited selections of both rounds.

With the presence of internet, however, you can always do a research of the online stores selling the specific round options you’re looking for.

As for the price, you need to understand that both rounds come with their affordable as well as expensive options. The limited availability of both rounds means you'll pay a higher than average price for them. Remember, these are primarily military rounds that are not as widely available to civilians on the open market yet, but that will likely change over time as less and less use by the military results in higher stocks of both bullets. That should bring down the price as well.

But the .458 SOCOM are usually more expensive per round compared to the .50 Beowulf.

Good news is that both cartridges are reliable, so if you’re a hand loading enthusiast, you can end up saving a good amount of cash.

As you can see from our detailed .458 Socom vs .50 Beowulfcomparisons above, the two rounds share a lot of similarities but still have their distinct differences.

Both rounds can do well when used for home defense situations, which is what they were initially designed for.

You can also count on them to successfully hunt medium to large sized games located up to 200 yards way from your stand. For longer distances, beyond 200 yards, you’d want to go with the .458 SOCOM rounds as they show more promising results.

Regarding recoil, the difference between the two rounds is quite small and insignificant, with the .458 Socom being on the higher end. But given the recoil force of the two rounds fall within manageable limits, this shouldn’t be an issue for you.

The best round between these two big bore bullets is a decision that we’ll live in your hands based on your specific needs and requirements.

Best Gifts for Hunters: From Funny to Useful, We’ve Got It All
Bow Hunting 101: Discovering the Parts of an Arrow
The Best 10/22 Accessories for You! (You Know You Need Them)
.243 vs .308: Which One Is Better For Deer Hunting and Why?
How To Waterproof Boots In 8 Simple Steps