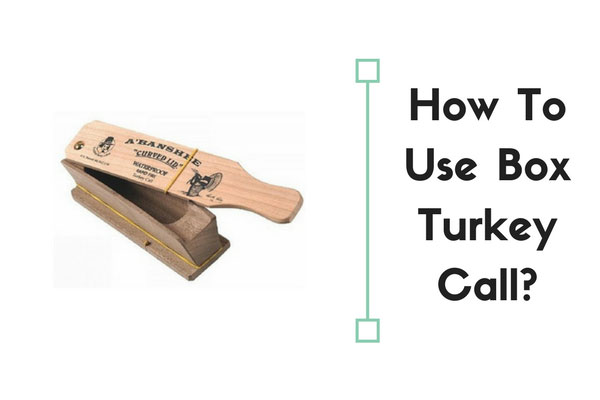 How To Use A Turkey Box Call The Right Way?

The gobbles, putts, clucks, purrs, yelps, cackles, cuts, and kee-kees of the turkey will all form part of your hunting repertoire if you get yourself a turkey box call.

The turkey box call is a device which produces turkey sounds when the lid slides across the surface of the box, creating friction. The devices are louder and sharper than calls made with the mouth. Besides box call therer are other types of turkey calls available on the market and I’ve put together a list of best turkey calls of every type in this blog.

Let me give you a call by call guide on how to use your turkey box call. Just before we begin, here’s a quick video to demonstrate the right way of using a turkey box call:

Unless you are already a seasoned turkey hunter, you will need to take some time mastering the various turkey calls. Otherwise, how will you know what sounds to make with the box call if you have never heard them?

You don’t have to go into the woods to do this. Search for YouTube videos about turkey calls, and spend time listening to and mastering the various calls. They include gobbles, clucks, cackles, yelps, putts, purrs, and kee-kees.

Rub chalk on the box call

If the box call sounds off-key, or if it doesn’t produce the sound it usually produces, apply chalk to the lid. The chalk provides the friction that the device had begun to lose. Quality box calls rarely need chalking.

A lone turkey will make a yelp, seeking to get back together with the flock. To make a yelp sound, apply pressure to the lid/paddle while sliding it across the lip of the box’s side panel. You hold the box in your left hand, with your thumb pressed on the base of the paddle, and use the right hand to slide the paddle back and forth.

Make it a smooth, scraping movement to produce that full sound you aspire to. Don’t pull the paddle too firmly – a gentle, smooth swing will do.

To create different variations of a yelp, vary the speed or friction.

The cackle and the gobble

Hold the device vertically, and shake it. The lid will make a clattering sound against the box. If you shake it with speed and vigor, the resulting sound will be a turkey’s cackle. A turkey will cackle when communicating its location to another turkey

And if you shake it lightly, slowly, the resulting sound will be the gobble. A male turkey makes the gobble to attract female turkeys. The gobble is also used to challenge other male turkeys.

These calls will provoke a responding cackle or gobble from a turkey in the vicinity, revealing its location.

When the turkey is excited, it makes a cutt. So to excite the bird into revealing its location, make a cutt using your box call. Hold the box in the right hand and the paddle in the left. Make swinging movements, hitting the paddle with the box. Don’t hold the paddle tightly. Find the rhythm and make that box sing.

Hold the box in your left hand, while pressing your thumb on the base of the paddle (where it turns). Use your left hand to lightly slap against the paddle’s other end to slide it back over the box.

The cluck is a single sound. To make your second cluck, slide the paddle out, then lightly tap it back again. If you make the cluck, the turkey will gobble back, wanting to know where you are.

The purr is a slight, soft, scratchy sound made by softly, slowly sliding the panel against the lip, while holding the box in your left hand with the thumb pressing on the paddle’s base. Follow up the purr with a cluck.

So, now you know how to use a box turkey call, are you interested in making one of your own? Here’s a video that shows you exactly that:

Mind you, the first time you try these calls, they won’t sound anywhere near your intention, but don’t be discouraged. Keep trying, and over time you will refine your technique. Also, don’t forget to use a turkey vest when you go out for turkey hunting. The secret is to find the rhythm because everything in nature follows a rhythm. If your call doesn’t sound natural, the turkey won’t pay you any attention.