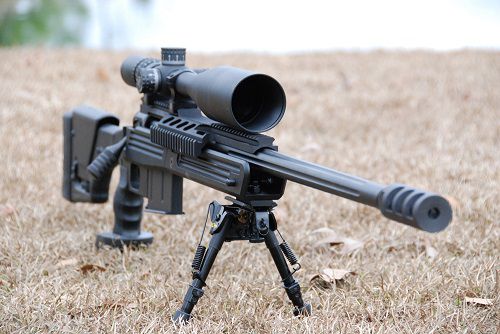 If you have spent some years behind your rifle conducting long range shootings, then you have to agree with me that this type of shot is far much different from the others.

Here, you need to stabilize both your body (make yourself entirely comfortable) as well as your rifle so that there are minimal or no movements when the target is in focus.

Achieving such stability can ONLY be obtained with the aid of a bipod. But again, not every bipod is equal to this task. Only specific bipods will help you make the long range shot of your life.

Things To Consider Before Buying A Bipod For Long Range Shooting

An adjustable leg design is of the top factors that you should always look for whenever you’re buying a bipod for your long range hunting.

This is simply because such bipods allow you to try various shooting heights until you find the most suitable one.

An ideal bipod for long range shooting should also come with various flexibility features such as panning, cant, etc. this allows you to easily align the crosshairs of your scope and make a sharper focus on your target.

Considering that you might have several firearms that you utilize for long range shooting, you want to buy universal bipod that works with all of them.

As such, consider buying a bipod that comes with swivel stud feature to allow mounting to any gun.

You don’t want a bipod that breaks easily and trembles whenever you place your firearm on it, right?

Therefore, always go for string and durable bipods that stands the tests of time and gives you the best support. Bipods made form hardened steel and aluminum have proved to be the strongest and the most durable in the market.

If you’re looking for a bipod that allows you to successfully execute long range shootings, look no further. Harris Engineering 1A2-BRM Solid Base 6 – 9-Inch BiPod gives you the stability and comfort that no other bipod will ever give you.

It is a professionally engineered bipod for the best results. It has notched legs that offer you up to 5 height settings.

Made from Strong Materials

As a long range hunter, you understand how much important the stability of your weapon means to you. It determines the outcome of your firing activity.

Luckily, this bipod allows you to enjoy such stability. It comfortably bears the weight of your rifle without making any wobbling movements. This is made possible by the fact the bipod is constructed from aluminum alloy plus a steel mounting base.

The materials used to make this bipod are also very light. The bipod is only 13 ounces heavy. Carrying the bipod with you over long distances becomes more convenient.

It does not add any weight to your bag. When attached to your gun too, it does not make it bulky.

Easily attaches to a variety of firearms

The bipod comes with sling swivel stud. That fully explains why it will attach to any firearm easily. Does it feel great to use a single bipod on all your firearms rather than buying a bipod for each?

Notched Leg design offers you several heights to choose from

That means that you’ll extend from 6 to 9 inches- a total of 5 height settings. As a long range shooter, you’ll truly get a height from these 5 positions to make a more accurate and precise shot.

The Bipod Legs are Foldable for Easy Storage

Packing the bipods in your bag is real easy. All you need to do is fold the legs together such that they occupy minimal space in your bag.

Tiptop® EZ Pivot & PAN Rifle Bipod is yet another bipod that comes with a set of impressive features to meet all your long range hunting needs. This bipod is completely easy to set up.

And once you’ve set it up, you’ll be able to use its flexibility features to aim sharply at your target which is a thousand yards away.

The pivoting feature that comes with this bipod is a great deal for every long range shooter. It allows you to adjust your weapon on uneven terrains by leveling it up to 34 degrees.

As if that is not enough, the bipod comes with a pan function. This is another flexibility feature that allows you to rotate your weapon from left to right (on a horizontal arc) for up to 40 degrees.

When you combine all these flexibility features, plus the durable materials used to make the bipod, you get the bipod of your dreams. A bipod that allows you to make super-accurate shots when you’re yards away from your target.

The bipod is constructed from the aircraft grade alloy and other metal materials. This product thus carries any of your rifles without feeling weak.

Its strength grants you the level of stability that makes your weapon unshakable and ready to fire an ideal shot!

Whether you’re shooting off a bench or on the floor, this bipod becomes your great companion. It allows you to extend it legs between 6 and 9 inches.

This means that you’ll be able to test the accuracy of your rifle at various heights and pick one that is likely to give more promising results.

If yes, you’ll clearly see how easy it will be to move around with the bipod in that position. You don’t have to attach and detach the bipod every now and then.

The result is that the bipod becomes much more stable on any ground you’re shooting.

Horizontal rotation of your rifle when it’s resting on this bipod is also possible. A panning allowance of 40 degrees in either direction allows you to track your target easily.

Eventually, you’ll make a sharply focus on it and shoot it precisely.

The third best bipod you’ll love to employ for the rest of your long range shooting activities is the Caldwell XLA Pivot Model Bipod.

What qualifies it as one of the best bipods for long range hunting?

Believe it or not, this bipod is very stable. It gives you a support strength that allows you to confidently sight a target far away from you. The bipod is available in different colors (black and camo) and comes in four height ranges.

Yours is to choose the most appropriate one for you depending on your shooting needs.

Caldwell XLA Bipod is a well-deigned bipod for long range hunting, right priced, and a universal bipod that fits perfectly well with a wide range of your guns.

The XLA Bipod does not disappoint when it comes to giving you a comfortable and stable shooting platform. This stems from the fact that it is made from very strong materials that can withstand the weight of any gun.

This bipod is long lasting. The lightweight aluminum materials used in its construction serves as enough prove.

The bipod comes in 4 different height variations. These heights are 6-9 inches, 9-13 inches, 13-23 inches, and the tallest of all is 13.5-27 inches. This ensures that you can pick the bipod that meets your specific long range shooting needs.

Remember that for each height category, you can also choose between black and camo colors.

Easily attaches to any firearm

If you have several firearms that have the stud feature, you can easily attach them to this bipod. This is because the bipod comes with swivel stud sling.

The improved flexibility of this bipod is attributed to the great swivel movement it makes. The pivot swivel is designed in such a way that it allows you to make a wide range of motions while still holding your weapon steadily.

Their prowess in enabling you to fire accurately can only be witnessed when they’re put into action. Pick any of these bipods today and change your shooting life completely.