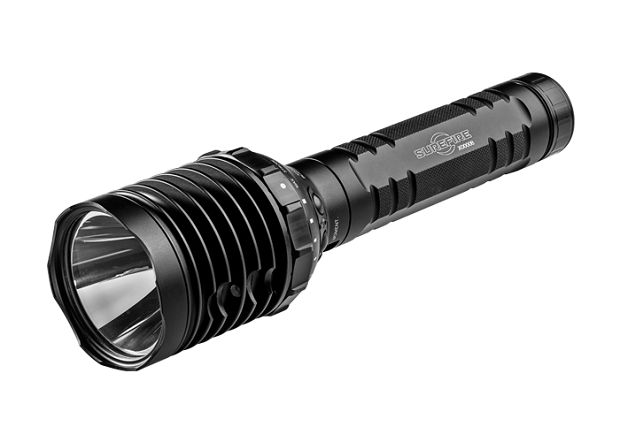 After long years of waiting and huge anticipations, SureFire Dominator has eventually become a reality.

So, if you occupy yourself with any of the professional tactical operations such as search and rescue, border patrol, maritime operations, military activities, etc, a permanent light solution for you have been born.

As the most powerful LED flashlight from SureFire, the handheld utilizes the state-of-the-art Luminous CBT-90 LED technology to output an incredible white light of 2,400 lumens!

Upon shining on the smooth high precision reflectors, this blinding white light is molded into a 200,000plus candela beam that covers a distance that’s beyond your expectations.

The monster flashlight from SureFire supports a total of 9 output modes (with strobe mode available). As a Duel Fuel flashlight, it can be powered by either rechargeable or non-rechargeable lithium batteries.

Want to hear more interesting tales about this SureFire light?

As you’ll agree with me, it takes a great LED system to output 2,400 lumens of white light. SureFire, therefore, employs the Luminous CBT-90, an advanced LED technology to enable the light to output such a big number of lumens.

The ultra bright produced is great but not the end of the light’s high performance.

The real deal is struck when this light mirror-like, high precision, mirror-like reflector. Here, the beam undergoes a special treatment, converting it into an impressive, far reaching beam with an intensity of over 200,000 candelas.The beam has an extremely intense center spot and corona whose intensity is slightly less than that of the center spot.

While this corona can illuminate an area about 300 yards away, the center spot doubles this distance- allowing you to illuminate objects over 650 yards away.

The body of this light is made from high strength aerospace grade aluminum metal. This makes the body strong and capable of withstanding regular abuses associated with the tactical flashlights.

The durability is reinforced by coating the body of this light with mil-spec hard, matte black finish that is immune to scratches, corrosions, and abrasiveness.

SureFire packs the flashlight with a dozen of CR123 batteries and one Li-Ion nonrechargeable battery to make it ready for use the moment it arrives at your house.

The 11-selector ring that comes with this light allows you to utilize different modes of power from the same light other than the High Setting of 2,400 lumens. Note that if you opt for a lower power mode than this, the beam distance will decree but the runtime will be higher.

Here’s a chart of the different power modes:

An integrated fuel gauge LED system in this light allows you to read the remaining battery power quickly.

Here’s how it works:

1. Green: indicates that the battery level is 90% or more and can thus sustain the current level output.

SureFire Dominator is gasket ad O-ring sealed. This acts as enough evidence that you can use the flashlight in any weather condition without fear of factors such as dust moisture, dirt, mist, fog, etc., interfering with its operation.

As we’ve already said earlier, the light is primarily designed to be rechargeable. It’s for this reason that the manufacturer included the lithium ion battery in the package. Other charging accessories that come with the battery package to make it easy to charge the light include AC wall charger (with international adapters) and 12DVC car charger.

A detailed user manual on how to charge the flashlight is also included.

When the selector is OFF in any given position, there’s an alternative way of controlling the flashlight. And this option involves using the three head switches that area extremely easy to operate.

CONST (constant ON): use this to activate the flashlight in the mode selected by the ring. If you press this switch again, you’ll turn the light OFF. While the light is on, you can sue the selector ring to vary the output mode.

MOMENT (momentary): this one provides momentary output by the selected power level until you press the button. Again, you can sue the selector ring to switch between different output levels when the light is on.

MAX BLAST (Constant ON): this switch triggers the 2,400 lumens r maximum output level. It does this irrespective of the current level of the selector ring. Pressing this button again turns the light OFF.

1. Does the box come with batteries?

Yes. SureFire Dominator comes with all the items ready for use, batteries included. It comes with one lithium-ion rechargeable battery and a dozen of 123A non-rechargeable lithium batteries.

2. What’s the highest power output of this flashlight?

SureFire Dominator outputs a whopping 2,400 lumens of blinding light. This light equates to a far and wide reaching beam with an intensity of over 200,000.

Absolutely! The flashlight supports up to 9 power output modes. The different modes have different lumen rating. The lower the lumens, the longer the runtime.

SureFire Dominator is the most powerful and effective handheld flashlight from SureFire. It’s truly an ideal flashlight for all your tactical operations. It employs state-of-the-art LED system which enables it to produce the blinding light of 2,400 lumens.

With a smooth reflector that produces an extended-range beam, the light will leave nothing to your imagination. This flashlight is a hint of what the future lights will look and work like.

Order your package right away and get the unlimited benefits and First Class performance offered to you by this flashlight.

I’m not easily imerspsed but you’ve done it with that posting.