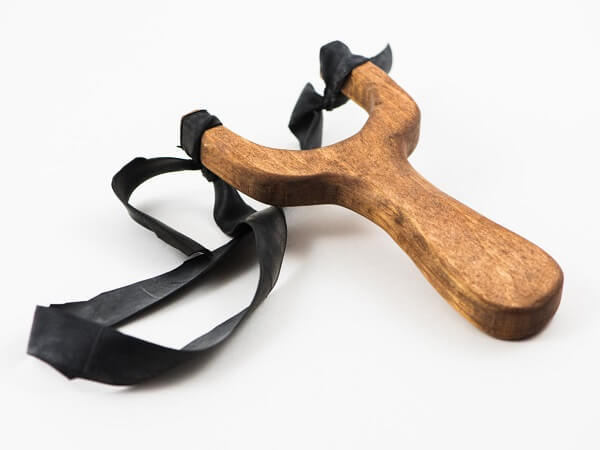 10 Awesome Tips For Hunting With a Slingshot

Most of us could look at the slingshot as a children's toy. However, it was used since ancient times as a weapon, other times it frequently was used as a hunting tool, to get prays for their meet or fur or for practicing hunting sport. It has the same mechanism of the bow and arrow.

We recommend reading this article to the end, to get to know 10 awesome tips for hunting with a slingshot that will help you becoming an expert in using a slingshot after practicing, and following these tips.

Slingshot is a small projectile shooter that fits the human hand. It is a Y-shaped hunting tool, with two rubbery strips attached to a piece of leather, which is a small pocket helps in holding the projectile. People use it by drawing the pocket backwards to required extent, until you get enough power to shoot your projectile.

From the ancient times, slingshots have been used to disperse the bait into the water streaming in a large open area. This is considered an old trick to attract the fish near the fishing rod, to ease fishing them.

Slingshot also used as weapons, as they were very cheap to make. All what was needed to create a decent Slingshot is a piece of wood, two elastic strings, and a piece of cloth or leather. Moreover, its small size made it a perfect weapon that could be carried easily anywhere.

Slingshots are used in hunting as well. People since ancient times used the slingshots to aim on their prey, and shooting them with fast and powerful projectiles to hunt their food, or to get fur.

Benefits of having a slingshot always with you

Here are some benefits you might get from always carrying this small slingshot with you all the time, don't underestimate this powerful tool, maybe when you read the following you'll know the importance of purchasing a slingshot and always crying it with you.

Here are some of the best tips for hunting using a slingshot, which allows you to get the best results, and act like professionals.

Do not get tired so quickly, and remember, everything gets easier through practicing. Gaining the experience is not easy, but the result will satisfy you.

Before going out shooting all the creatures you meet, try practicing on the moving ﻿targets like flying plates, but this step must be taken after the step mentioned in the previous part, which is practicing on stationary targets.

This way, you won't wound animals in vain. Don't go out there in the wild without being sure 100% that you can hit any moving target now. And don't get disappointed if you didn't do it from the first time, always remember that we will get better and better by practicing.

In addition, you have to study the environment they're living in, and the reactions they make towards any action. This step will ensure that you know exactly what to expect when you go hunting for a special kind of prey.

4- Always aim on the head of the prey

Most preys has bushy body and tails like squirrels, or have a lot of feathers like pigeons. This means that if you aim to their bodies it will be just a waste of time, and they will be able to run easily.

Hitting heads, specially the brain area in enough to kill any prey from the first shot. If you didn't hit the head of your prey form the first shot, it means that it will hide, and you won't be able to find it anymore.

You'll cause a lot of pain to you prey if you wounded them without killing them from the first time, so remember to always aim in their heads.

5- Listen carefully to the noise

To be a professional ﻿﻿﻿slingshot hunte﻿r, you must have golden ears. You have to listen to the unusual loud noise, because it means that there's a prey around. All you have to do now after hearing that loud noise in the bushes, or above trees is to stop and stand silently.

After ensuring the presence of an animal in the area, don't make any noise, even the sound of your breath mustn't be heard. Talk a deep breath, hold it, focus, aim, then shoot!

6- Don't get deceived by the instant drop

The instant dropped animal is more likely to run away from you faster than any other animal, as wounded animal may drop under the effect of the shock, but when it gets up, you'll never be able to catch it anymore. So, you must always stay prepared for doing a quick follow-up shot before it runs off.

When you shoot your prey and wound it, it mostly tends to run off. If it does so, you've now to find its place, as it more likely to hide between bushes after getting wounded.

To discover the places the wounded prey hiding in, start following the blood traces, that with no doubt will lead you directly to the hiding place.

Hunting in late hours of the day won't benefit you, as most of preys like squirrels and birds start moving in very early hours in the morning. So, if you don't want to return empty handed, always visit the woods in the first hours of the morning.

Speed is really important when dealing with fast preys like squirrels and doves. So, if you're carrying a lot of load you won't be able to move fast enough to track your pray. Always remember to talk only the essential things you're going to need in your adventure, and eliminate any un-wanted loads.

10- Be merciful, and don't waste out life

Hunting is a noble sport, so you must not smear it through hunting only for pleasure, and hurting poor animals for no reason. Wasting lives in vain won't help you, but hunting for meat is really fun and beneficial. And finally, try to kill you prey from the first shot, to prevent it from feeling pain for a long time.