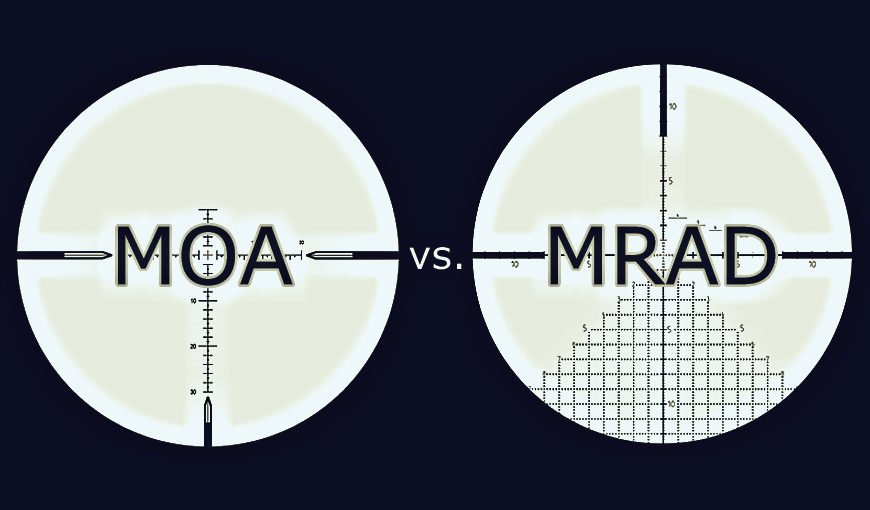 MRAD vs. MOA: Which One Wins the Long Distance Game?

When you are shooting at distances for which wind and elevation changes are major factors, you need to choose the right scope. MRAD and MOA are measurements used to display your exactness and correctness at distances between the open end of your gun and the target. Here in this article we compare the MRAD and MOA scopes.

MOA, which stands for Minute of Angle, is usually around 1" at 100 yards. This simply means that your rifle is expected to strike a 1" circle at a hundred yards. Your accuracy may be better than that, or wind and other variables may transfer it out of that circle. Here, you will want to make adjustments.

MRAD refers to Milliradian, and is nearer to 3.6" at 100 yards. While this may offer you a bigger initial impact circle, the turret adjustments are usually 0.36" for every click at a hundred yards. This translates to an adjustment that is less fine for greater distances.

There are a few differences between the two scopes. Below we look at some of these differences in detail.

The most usual adjustments are 1/4 MOA or 1/10 MRAD. The 1/4 MOA clicks give finer adjustments than the 1/10 MRAD. This difference is pretty small and it would be challenging to say that you can hit between those figures.

It is a Bit Easier to Communicate MRAD Values

1/4 MOA adjustments use up more room and are usually a bit more difficult to read than 1/10 MRAD adjustments. The turret adjustment for 725 yards is roughly 22.75 inches for MOA, or 6.6 inches for MRAD. This angular adjustment is relatively the same, but MRADs are bigger units so they're represented by relatively smaller figures than MOA.

Furthermore, units stated in tenths fit the number system better than fractions. This makes a range card easier and faster to read, and it's also a bit easier to tell a partner the elevation values. It is definitely easier to communicate 6.6" rather than 22.75".

Your Natural Way of Thinking

If you're a person who thinks and talks naturally in terms of centimeters and meters, the range estimation is easier and quicker with a MRAD scope.

On the other hand, if you're a person who thinks and talks in terms of inches and yards, the range estimation is easier and quicker with a MOA scope.

If you do not intend to carry out the range estimation with the scope, then both systems are equally good.

What the Professionals Use

Influenced by the Manufacturer and the Military

There is no doubt that the popularity of the MRAD scopes is greatly influenced by the military's standardization on the MRAD scopes. It is very common that when the military standardizes something, the item becomes very popular among civilians (at times regardless of there being better items in the market).

For instance, the civilian equivalent of the NATO cartridges such as the 223 Rem, 300 Win Mag, 308 Win, 50 Cal and 338 Lapua. There are probably other cartridges that are better, but those NATO based cartridges continue to outsell all the other cartridges.

A lot of manufacturers prefer to focus on MRAD scopes because they're in competition for military contracts. Additionally, since the 2 scopes are very similar and there isn't any inherent benefit to either, they don't see why they should tool their whole assembly line to produce both.

Furthermore, since the demand for MOA scopes isn't that high compared to MRAD, manufacturers may choose to only produce MRAD scopes to lessen internal complexity and have added efficiency.

A lot of the high-end systems are produced by European companies, and almost all countries outside the United States have fully embraced the metric system. As a result, it is not much of a sacrifice to them to only produce the MRAD scopes.

Matching the Reticles and Turret Adjustments

It is all about the ease of use. You need to know how to make adjustments. A lot of scopes possess a dot-reticle to assist with the adjustments. A dot-reticle is a sequence of dots along the cross hairs that are used to show the distance. They are often measured in a MRAD scope.

Whatever scope you choose to use, do not mix reticles and turret adjustments of different units. A lot of the entry-level systems might possess a mil dot reticle (MRAD based), but the turrets may be in clicks of 1/4 MOA. This does not make sense, and it can limit how fast you are able to make second round adjustments.

If you're using a reticle or turret that is either MRAD/MRAD or MOA/MOA, and your first bullet is splashed at a low impact, you can easily measure the distance using the reticle and make adjustments for a quick follow-up hit.

For instance, if you see a 1 MOA or a 1 MRAD low, just adjust your knob and add 1 MOA or 1 MRAD respectively and you will have a second round shot. Alternatively, you can hold up by whatever units you measured rather than adjusting it and avoid the conversions.

Mixing the units can make things hard than they need to be. For instance, you may have a system with a mil dot reticle and MOA turret adjustments and may see the bullet splash at 1.5 MRADs low.

At the end, I hope this article has been helpful. Choosing between a MOA and MRAD all comes down to ease of use. Just choose the one that better fits your needs.

For target shooting with .22 Rifles, check out the Best Rimfire Scope Reviews!

How To Sight In A Scope

Best Rangefinder: The Top 10 for Hunters

I had a conversation with a buddy not long ago about this. I wouldn’t recommend anyone lose any sleep or stress over your reticle and just use the one you’ve grown comfortable with.

The information here is helpful but in the end, it’s important to use what you are comfortable with using.