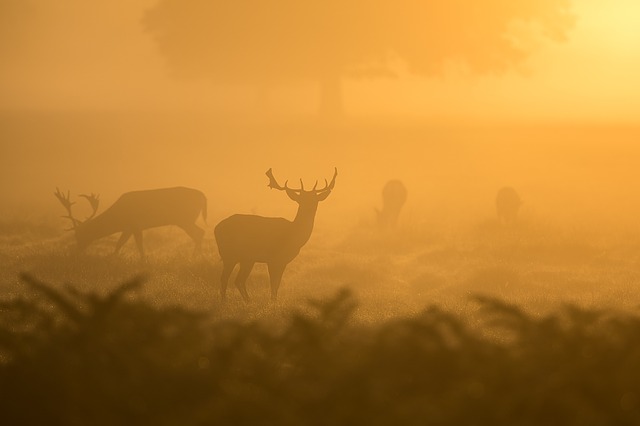 The secret to attracting that vigilant whitetail buck into your bow range lies in using the most popular deer attractants- calls and scents- properly.

Calls will make grunts, rattles and bleats and effectively trick the bucks hearing sense and strike hard its natural curiosity.

Scents, on the other hand, will dupe the deer smell sense and again his natural curiosity will send him to come exploring to your hunting area. If you use the lures individually, they have the capability to bring to your range the whitetail buck.

But when you use them together, you have the ability to bag home that trophy buck.

Let’s discover these two deer lures to your hunting advantage.

Note: We have divided the guide according to deer season to make it easy for you to understand…

Scents: The appropriate scent you need to use here is the doe urine. It will console deer as they travel through a range that all is well in that part of the forested areas, particularly as they go about on the feeding routines that are regular at this point.

If you choose the estrous smell at this stage, you'll just spook the deer, as they will realize that it is not common for this season of year.

Calls: A grunt will work for now. It's great throughout the entire season and is truly the main call that ought to be utilized during the early season. If you’ve a flexible tube, make the grunt less deep and throaty to make it sound more like a youthful buck.

This will be less scary to the mature bucks during a period when they have not started challenging each other harder.

Scent: Bucks are getting inclined up for the coming rut, and this is the ideal opportunity to challenge their dominance.

Buck urine, sprayed either on the high-movement travel paths or in with scrape, can lead to a bruiser charging!

Calls: Right now is an ideal opportunity to break out the medium to a heavy set of rattling of antlers or the rattling bag. Bucks are starting to truly provoke each other, and even the more inactive ones will be interested in who is fighting.

Begin gradually and work the antlers into a noisy conflict for a few minutes, staying cautious to any bucks that may surge in.

Take a break of around 15-30 minutes between every set. Whenever rattling, blend in a few grunt calls or rake a tree or the ground for improved realism.

As the rut approaches, rattling will prove more viable.

Scents: Within the weeks of the rut climax is the point at which you need to bust out the top-dollar doe estrus scent.

When you begin eying those first bucks, whether in a trail camera or in person, running loopy over the woodland on the trail of the doe, spread this scent generously around your hunting stand on 3 or 4 wicks.

Blend in some small tarsal gland to fuel the jealousy of the dominant buck. Employ both on-drags pointing to your stand.

Calls: When you recognize the buck cruising looking for does at the rut peak, three or four short, fast doe bleats will make it think an eager doe is close-by. If it gets on a doe's trail and doesn't hear the bleats, toss one, uproarious grunt wheeze in its direction.

That can stop a buck in its tracks and bring it stepping back toward you.

Also continue with the rattling and grunting during the peak.

Scent: With rut action slowing down, the whitetail's thoughts will come back to food, particularly in areas where winters can be extreme.

For the most part, it's a great opportunity to come back to the basic doe urine to make the buck feel at ease.

Around 28 days after the rut peak, the second rut will kick in and you ought to return to utilizing the estrus scent. Since the second rut intensity is always lower, don't anticipate that it will work the miracles it did a month back.

Calls: The fights are also slowing down, the deer have been run hard, plus the hunting pressure is high.

Each sound you produce now should have one objective- to assure the buck that all is well.

Occasional doe bleats that mimics the last estrous will be effective, but in general, simply stick to light, periodic grunts when you really have your eyes or ears bolted on the deer moving nearby.

Hopefully you have learned how to use a combination of the right scents and calls during the four stages of deer rut stages. Implement these strategies and you will always be thankful to this post!