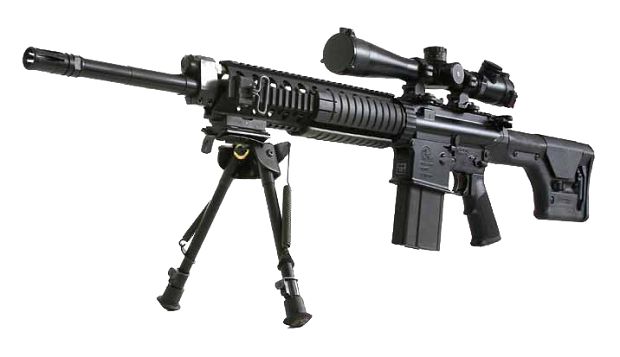 Looking for the best bipod for AR10? Then look no further than here. In our review below, we have picked the three best bipods that you can use with your AR10 rifle. The bipods are coupled with great features to enable you to realize the real prowess of your rifle when you put it to the  task.

As you’ll see in our review below, these bipods have cool features like ability to extend their length to suit the terrain you’re working on, a mounting system that first solidly on a Picatinny rail, heavy duty design to support your rifle (no matter how heavy it is), and last for years to come, etc.

For these and many more important features about these top bipods for ar10, read our review below…

At the top of our list is Atlas Bipod w/ADM 170-S Lever BT10LW17 from AccuShot, one of the giant manufacturers of top-rated bipods. The fact that this bipod offers the best quality makes it earn so much trust in the law enforcement and military camps. Precision rifle shooters like you will also be proud to own this bipod.

Flexibility is well catered for in this bipod for the best results. The stainless steel legs allow you to extend them to quite a long height range for precise shooting. The built-in cant and panning are the best when it comes to making last-minute adjustments to ensure you’ve total advantage over your target.

One of the most important things you look for when buying for a good ar10 bipod to use with your ar10 rifle is its mounting option. Given that your ar10 features a 1913 standard Picatinny rail system, you’ll definitely go for a bipod that attaches to it directly.

And here it is…

The next thing you’d like to see a potential ar10 bipod do is extendable legs that easily to allow you to stabilize your gun in unbalanced terrains. Luckily, the Atlas bipod does this professionally. It comes with strong stainless steel legs that have been allowing you to adjust them between 4.75”-9”. This translates to five different height positions.

The legs are notched to help you lock on your set height. They’re also knurled to promote easy handling.

Yes, you heard it right. A pan and cant allowances that goes up to a total of 30 degrees is another great feature that accompanies this bipod. And as you know, it helps you make horizontal adjustments to your gun. This is especially helpful when shooting a moving target.

The body of this bipod is made from the strong T6061 aluminum metal to help it endure all future abuses. The surface is then graced with a hard anodizing that keeps the bipod free from rust and abrasiveness.

The second best bipod for ar10 is the 6-9 inch hinged base bipod from Harris. Every shooter acknowledges Harris. They respect the fact that their bipods are widely used in military communities and have the best services ever.

Now, this bipod is elegantly engineered to help meet your 1r10 shooting needs. Whether you’re a beginner or an expert shooter looking to improve your shooting results, this bipod will help you shoot like a pro.

The fact that this bipod features a hinged base means that it clamps directly to the standard Picatinny rail or the sling swivel stud. The strong spring-loaded legs of this bipod make it easy to adjust them between 6 and 9 inches for a more accurate shooting on unbalanced grounds. You’ll also love the fact that this bipod has attractive prices and is readily available.

The last best bipod we’d highly recommend you to secure for your ar10 rifle is this TipTop tactical rifle bipod. It has everything you need to shoot like a pro even in the most challenging situations.

The professionally engineered bipod bears a durable body design to enable it to manage the recoil of your rifle. The durable body is then coated with antirust finish to make it suitable for use in all weather conditions. Since this metal is lightweight in nature, it makes the entire bipod so light that it adds no weight to your bipod.

The true meaning of flexibility is expressed in this bipod. The cant function that allows you to pivot our file up to 38 degrees is awesome! The panning which goes up to 74 degrees is even more amazing.

A patented mounting system that allows you to fix the bipod to your standard 1913 Picatinny rail in seconds is a characteristic we can’t forget to mention. It dramatically reduces the time you take to mount or dismount the bipod from your ar10 rifle.

How To Buy The Perfect Bipod For Ar 10?

When it comes to take static shots with a firearm like the AR 10, using the best bipod can give you a greater sense of accuracy. Conversely, using the wrong tool can be the beginning of your woes.

There have been many cases where a bipod breaks or even falls apart during the action. The first pointer to a substandard bipod is usually a loose construction. When a bipod comes loose, don't expect it to last for long especially if you're going to use it afterwards frequently.

Unfortunately, many shooters don't even pay attention to such details.

To ensure you for buying the right bipod for your AR 15, there are specific key features you should perpetually be on the lookout for. Let's briefly discuss these features below:

Focus on the Materials

Just like the components of your firearm, there are so many bipods in the market today that are made from substandard materials. Most of these bipods tend to be cheaper even though they look similar to their expensive counterparts.

However, due to their shoddy construction, they are prone to degrade sooner than expected because they are not sturdy enough to withstand a lot of stress.

To get the best bipods, look for those whose parts are made from quality aluminum and other reliable materials. It is also essential to buy from a manufacturer with an established track record over the years.

Even though such bipods suppose to be a bit pricey, they will not give you a headache, and you will get the best value for your money.

Hopefully, there are still many safe options for budget-shooters.

Most bipods come ready to be attached either to a Picatinny rail or a sling swivel. Make sure you look away from any bipod that mounts directly to your barrel.

Usually, the nature of your chassis or stock will determine which style you should go for. If what you have is a Picatinny rail system, then make sure the bipod you're buying will afford you more surface contact and ease to dismantle the bipod  quickly when necessary quickly. If you are using a forward sling swivel, then buy a bipod that will mount properly and provide enough tension.

Whatever the case is, make sure the bipod you are buying will be able to provide enough lateral stability to enable you to shoot comfortably and more precisely.

The weight of a bipod matters a lot especially if you plan to carry it over long distances. A bipod that is lightweight is desirable if you're a hunter or you're engaged in a tactical shooting activity.

Even though you want a lightweight bipod, also pay attention to the constructions. As much as you don't want much weight on your hands, you also want a bipod that is made from high-quality, durable materials.

One of the most important factors you should always look out when buying a bipod for your AR 10 is if it has an adjustable Leg feature. A bipod that allows you to add length is very important as it makes it possible for you to shoot comfortably in various situations.

What this means is that you can shoot from different heights and angles whether you're in a prone position or a sitting position. This makes your weaponry more flexible.

Make sure you go for a bipod with a wide range of height settings. A typical example is the 6-9 inch bipod.

By following the above-mentioned factors properly, you won’t be purchasing a wrong Bipod for AR 10.

If you desperately need the best bipod for ar10 rifle, we highly recommend you to buy any of the above three. The above listed bipods are the best in terms of giving your ar10 rifle the desired stability in the uneven terrains.

They have efficient mounting system that attaches directly and quickly to your ar10 riffles. They’ve the real flexibility options that allow you to make the most precise adjustments in any shooting situation.