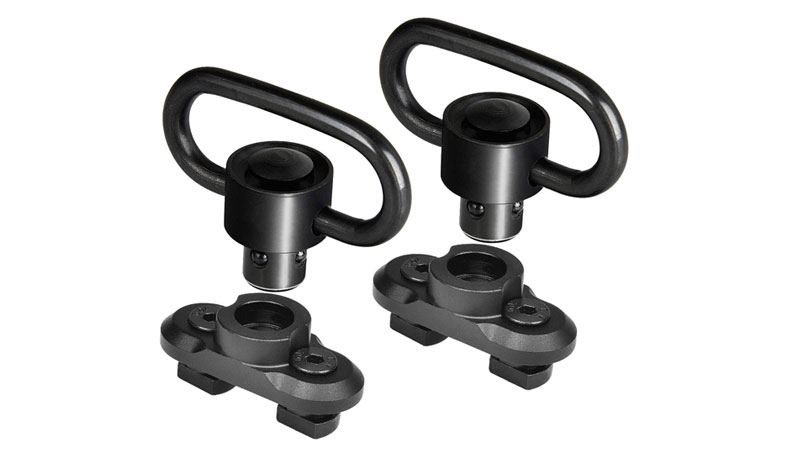 How to Attach a Bipod to a Sling Swivel

A bipod is a two-legged stand or support that allows you to prop your rifle so you can shoot more accurately. It is especially useful in situations such as hunting, where you’ll be shooting far down range.

Learning how to attach a bipod to a sling swivel is easy, and if your rifle already has a sling swivel, the process is simple. Usually, the retailer will sell an adapter that fits over or under the sling swivel. This adapter usually has a rail that the swivel attaches to, which provides a mounting point for the bipod while still utilizing the functionality of the sling swivel.

How to Install a Sling Swivel

This video from MidwayUSA walks you through the largely simple process for installing a sling swivel, something you might have to do when you’re learning how to attach a bipod to a sling swivel.

You’ll need a special drill bit to create two holes in the stock. You should also have on hand a level, liquid nails, and a clamp to hold your gun in place while you drill the holes. You should carefully ensure that your gun is not loaded before working on it, and always treat every gun like it is loaded.

Tips for Using a Bipod

When you’re using your newly attached bipod, make sure you get at least a few practice shots off with it before using it in a hunting or competition setting. Depending on where the sling swivel is attached, it can impact how your rifle shoots. Practicing with it will help your accuracy when it counts the most.

Our final tip is to not set your bipod on a hard surface. Instead, set it on a soft surface, like dirt, that will absorb rather than reject the recoil.

Best Gifts for Hunters: From Funny to Useful, We’ve Got It All
Bow Hunting 101: Discovering the Parts of an Arrow
The Best 10/22 Accessories for You! (You Know You Need Them)
.458 Socom vs .50 Beowulf: Head To Head Comparison!
How To Waterproof Boots In 8 Simple Steps