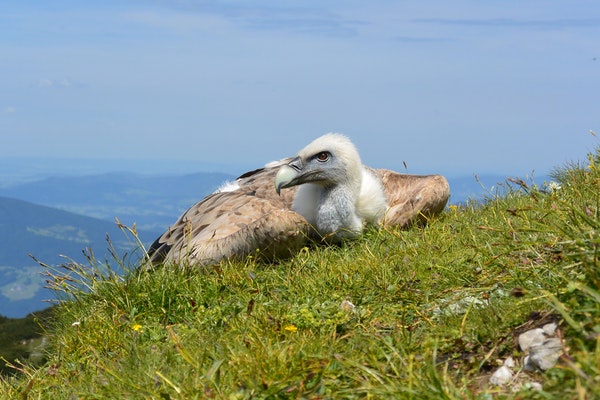 Vultures are usually stigmatized because of two factors, their appearance, and their habits. Vultures are large, and usually less-than-attractive birds, with naked heads consisting of bulging folds of skin or protuberances. In terms of habits, vultures are scavengers that feed on the remains of dead animals.

Thus, the association of these large birds with death has led to a rather grim outlook toward their species.

However, this bird has largely thrived on its ability to do what other birds and animals will not. Therefore, it is only fair to give this often stigmatized species a chance and to acknowledge their remarkable adaptations.

Vultures have an incredibly keen sense of smell which allows them to locate food even while they are hundreds of feet above the ground, circling on rising thermals. In general, the part of the brain devoted to scent is much larger in vultures than in other birds.

Turkey vultures and other New World vultures rely on this special adaptation to locate carrion that is invisibly beneath the forest canopy. In addition to sharp eyesight, vultures are able to find food that could be hidden miles away.

Although repulsive in most respects, certain adaptations of vultures allow them to survive and defend themselves. Vultures have few natural predators due to their large size and reserved tendencies. However, when threatened, certain vultures may vomit up partially digested carrion in order to drive away predators.

Carnivores such as big cats and wolves have a keen sense of smell that can be overloaded with such a foul defense. Although not a very pleasant way of dealing with opposition, this adaptation is nonetheless highly effective. Furthermore, vultures face dangers from the very food that they eat. Dead and rotting flesh contains high volumes of bacteria, which can also infect the birds that feed on the meat.

Vultures have curious ways of removing any bacteria they might have come into contact with while feeding. Many vultures stand with wings spread in order to bake off any bacteria on the feathers, and will even urinate/defecate on their feet in order to remove microbes from their skin and talons.

Their excrement is very high in uric acid and can sterilize their skin. Furthermore, the water in the urine can evaporate off the legs and act as a heat regulator.

The very adaptation of surviving on carrion as the primary form of sustenance is the vulture’s most successful adaptation of all. As a species, vultures hardly suffer from lack of food or die from starvation. If other animals are killed by harsh winters, poor food supply, or predators, then the vultures will have more of a food supply.

The more death occurs, then the better off vultures will be, and death of animals is a constant reality. Vultures are also known to eat plant material, such as rotting pumpkins. Because of this versatility, abundant food supply, and lack of predators, vultures are able to live for a long time by bird standards. The California Condor can reach an age well into the 50s if it does not succumb to human intervention.

Most certainly. But vultures are one of the most successful birds on the planet, and can be considered one of the most versatile. Though demonized and given a bad reputation, the vulture is near the top of the evolutionary ladder in birds and will continue to thrive as long as death continues to exist.

5 Tips on How to Hunt Pheasant Without a Dog

Improve Your Hunting With Native Food Plots This Spring
Best Gifts for Hunters: From Funny to Useful, We’ve Got It All
Bow Hunting 101: Discovering the Parts of an Arrow
Best Hand-held Gps For Hunting and Fishing: The Top 10 Options
5 Tips on How to Hunt Pheasant Without a Dog